The European Commission has cleared, under the EU merger regulation, the proposed acquisition of Exel by Deutsche Post.

According to figures released from the Department for Transport (DfT), the number of lorries from the EU states which joined the European Union in May 2004, have shown an enormous growth in journeys to the UK.

P&O’s £325m pension deficit appears to be the last hurdle in the negotiations over a proposed £3bn takeover bid from DP World.

After 43 years as a high street retailer, the Safeway brand is to finally be put to bed at the end of this week (25th November 2005). The result follows the completion of Morrisons’ twenty-month conversion programme.

The findings of the Burns freight taxes inquiry were released in a press briefing yesterday (22nd November 2005), announcing that 96 per cent of all road hauliers see no level playing field with foreign operators. 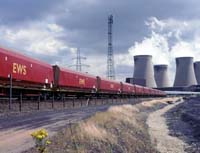 The UK may need dedicated freight rail lines due to the rising volume of imported coal being moved by train, according to a Network Rail executive.

Boots signs up Exel to assist in recycling waste

About one in six British HGV drivers is said to be suffering from a form of sleep disorder and may require medical help, a study says.