Sainsbury's has taken delivery of forty 3.

ProLogis is to go ahead with the development of a speculative warehouse scheme in Kent, which it acquired as part of portfolio of properties when it took over Astral's parent company Parkridge, earlier this year. 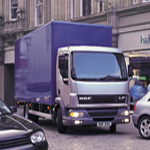 Banks are looking at new ways of financing the global supply-chain. Chris Lewis learns of some of the innovative techniques being introduced by the banking sector which can free-up working capital without needing formal title to the actual assets – they m

Sainsbury’s has taken delivery of forty 3.5 tonne Mercedes reefers and has another fifty on order.

Dairy Crest is to use Paragon’s single depot routeing and scheduling software for the daily planning of store deliveries from four of its dairies.

Beleaguered logistics managers across Europe are putting radio frequency identification (RFID) projects on the back burner and concentrating on data capture systems with a more immediate payback such as voice technology. By John Lamb

A team from MAN ERF UK and S&B Training, have returned from a two week trip to Nigeria, where they have been overseeing the construction of motorcycle ambulance trailers.