Toyota is using CeMAT to launch several new products, including key extensions to its Tonero range.

The firm is launching a new version of its counterbalance truck with hydrostatic transmission, called the Tonero HST, which was developed in Europe, specifically for the European market.

“This represents a big trust from Toyota that we could develop this here,” said Matthias Fischer, president of Toyota Material Handling Europe at a preview event in Hannover.

“It’s the only hydrostatic truck you’ll find in Europe with a real industrial engine.” 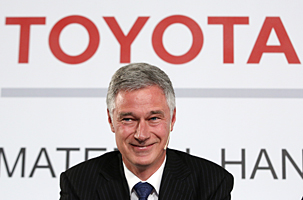 The family of counter balance trucks will also be expanded to higher capacity models from 3.5 – 8 tonnes.

The Tonero family will now span all capacities, and all types of engine will be available with the full range of of cabins.

The firm has also revealed that it intends to focus on wider automated solutions, including new versions of its AGVs and a new racking offering.   This has been rolled out across its regions from East to West, so is due to hit the UK market soon.

CeMAT will also provide the European launch of the BT Levio P-series in a smaller size with higher weight capacity, and which Toyota maintains is faster than any other model on the market.

Toyota’s electric forklift range will be updated with the Traigo 80, an 80 volt engine that can comfortably work extended shifts without needing a battery change or charge.

In addition, the firm’s I_Site range has been extended to include a mobile app which provides mobile access to performance data.