The sortation system is capable of processing 45 food products a minute to 11 destination lanes, which will allow the Lusk distribution hub to sort 20,000 products in a shift.

Alastair Magee, finance and IT director at Lynas Foodservice said: “We needed a solution to free up capacity in the Coleraine distribution centre where we hold all our stock.

“The automation which was installed there six years ago has been largely successful, however problems began as our business grew in the Republic of Ireland. We were getting a bigger and bigger bottleneck in the system during the early part of our evening as we rerouted product for that market. 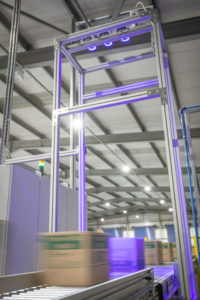 “Having already installed automation in Coleraine we were aware of some of the major players in the marketplace. We spoke to a number of providers and asked them to come up with ideas to deliver a solution to the challenge we were facing. When we got down to the design and costing phase there were just two contenders left and we ultimately chose Axiom.”