Costa Coffee is to pay a £70 per tonne supplement to coffee cup waste collectors to boost recycling rates from the current level of 14 million to 100 million this year.

The move follows a report by MPs calling for a 25p tax on disposable cups and a total ban by 2023 if they are not all being recycled.

Currently collectors receive £50 per tonne for cups and Costa believes that pushing that up to £120 will make it viable for them to put in place the infrastructure to process more cups. 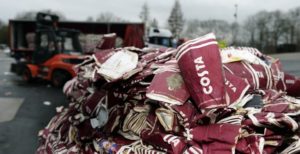 The scheme has been launched in partnership with five waste collectors Veolia, Biffa, Suez, Grundon and First Mile.

The plastic liners in coffee cups makes recycling difficult and there are currently only three sites in the UK than can process them: James Cropper in Kendall, ACE UK in Halifax, and DS Smith in Kent.

Combined they currently have capacity to recycle about 4.5 billion takeaway cups per year.

Costa managing director Dominic Paul said: “Following today’s announcement up to 100 million cups will be recycled this year alone and if the nation’s other coffee chains sign up, there is no reason why all takeaway cups could not be recycled by as early as 2020.”

As well as the £70 supplement, Costa will pay £5 per bale to ValPak, an independent third party, who will audit the system and report on recycling rates. On average there are 83,000 cups per tonne based on an average of each cup weighing 12g.