Narrow Aisle has announced the launch of the Flexi Smart Stop System – an ‘in-aisle sensor’ that immediately disables a Flexi articulated truck if its chassis comes in to contact with an object, such as a pallet load, racking or rack guards within the aisle.

Developed by Narrow Aisle’s in-house team of software engineers, the Smart Stop System causes the truck’s drive system to lock out if a Flexi touches a load or rack while turning in an aisle. The truck can only be restarted once the driver has reported details of the collision to the designated line manager, thus ensuring that no incident goes unreported. 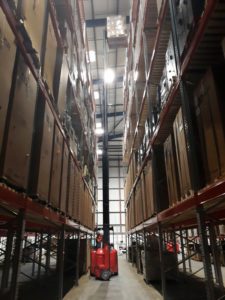 The ‘touch-sensitive’ technology has been used extensively as a safety system in the elevated work platform market, where the capability to detect impact at ground level is critical for machines that operate up to over 20m high.

The Flexi Smart Stop System is offered for use with the latest Flexi range of articulated forklift trucks, which have precise digital control over all drive and hydraulic and steering functions.

“Damage to racking and products caused by forklifts recklessly driven in and around the warehouse or distribution centre continues to cost companies thousands of pounds each year,” commented John Maguire, managing director of Narrow Aisle.

“With warehouses under pressure to meet throughput targets, it is important to make the operator’s job as easy as possible which is why the new Flexi has been developed to be one of the most straightforward trucks to operate on the market,” added Maguire. “Now the availability of Smart Stop makes one of the world’s most driver-friendly lift trucks even easier and safer to operate.”