UK manufacturing of commercial vehicles increased 9.8% in November (compared to the same month a year ago) as export production grew 43.5%.

Factories produced 785 more units in November than in the same month last year (8,768 units compared to 7,983) with the SMMT saying that the increase was partly due to the ramp up of key new model production. 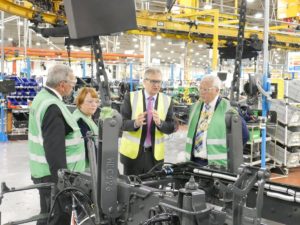 According to the latest figures from the SMMT overall commercial vehicle manufacturing is down 9.3% in the 11 months of 2019 compared to the same 11 month period in 2018.

SMMT chief executive Mike Hawes said: “It has been a turbulent year in the commercial vehicle sector, with political and economic uncertainty contributing to a drop in demand, especially from UK fleets.

“Operators need stability and confidence to invest so industry looks forward to working with the new government to help deliver an ambitious EU trade deal, which is tariff free, avoids barriers to trade and includes regulatory alignment,” he said.