FedEx Corporation has completed its takeover of TNT Express in a €4.4 billion deal that has taken a year to complete. David Bronczek, president and CEO, FedEx Express, announced the completion of the deal at a press conference.

Frederick W Smith, chairman and CEO of FedEx, said: “The timing of this historic event is important, particularly in the current market environment where global e-commerce is growing at double-digit rates,” Smith added. “Adding TNT’s capabilities to our existing world-class suite of services, including GENCO and the recently relaunched FedEx CrossBorder, will further expand the ability of FedEx to support business connections around the world.” 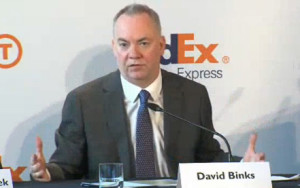 David Binks, president of FedEx Express Europe, will take over as CEO of TNT Express.

The integration process will begin immediately. David Binks, president of FedEx Express Europe, will take over as CEO of TNT Express. The headquarters of FedEx in Europe will move to Hoofddorp, TNT’s current HQ near Schipol Airport in the Netherlands.

Binks said that FedEx would be bringing the two brands together, but would continue to make use of the TNT brand for the foreseeable future.

The aim is to leverage investments in technology, infrastructure, facilities and operational capabilities to position the combined companies for long-term growth and success.

FedEx has been working on a road map for the integration of the businesses, which Bronczek said was focused on growing the business. As a result it plans to maintain TNT’s Liege hub alongside FedEx’s existing hubs at Paris and Cologne.

The combined group will have some 400,000 employees around the world. FedEx handles 11.5 parcels a day while TNT handles one million a day. Bronczek highlighted the importance of TNT’s has large European road network, which will be integrated with FedEx’s air express services. 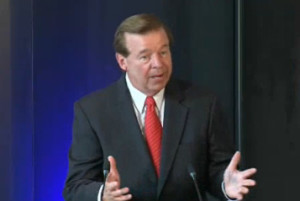 In the near term, customers can expect to interact with each company as they always have and receive the world-class service they have come to expect. Once the integration is complete, FedEx expects customers to enjoy an expanded global offering that draws upon the breadth of expertise from both companies.

FedEx had to overcome a number of regulatory hurdles that slowed the takeover  process. At the end of April, it received unconditional approval from the Chinese Ministry of Commerce (MOFCOM) for its takeover of TNT – the final major obstacle to the deal.

TNT has been preparing for the deal. Earlier this month it said it would sell its overnight distribution subsidiary TNT Innight to the private equity firm Special Situations Venture Partners III, as it wants to concentrate resources on strengthening its core express delivery activities.

Fred Smith said: “Over our 43 year history, FedEx has repeatedly reinvented and revolutionized the industry, from the first overnight express service backed by a money-back guarantee to the invention of internet shipping. And just as we revolutionized the U.S. domestic parcel business through the acquisition and development of what is now FedEx Ground, the acquisition of TNT will change the way customers view FedEx around the world.”