Work is due to begin on the 19-acre site, situated just off the A13, later this month. It is the second facility for Ocado in the SEGRO portfolio – the real estate investment trust (REIT) which owns or manages 84 million sq ft of space valued at £11.7bn in the UK and Europe.

Ian Starling, group head of real estate at Ocado, said: “These are exciting times for Ocado.com, now a joint venture between Ocado Group and M&S, and this latest CFC will provide new capacity to bring an even better offer to UK customers.” 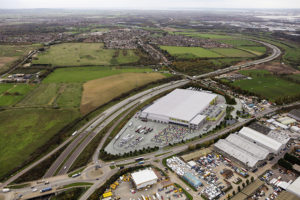 The Purfleet site, which promises to utilise the retailers’ robotic packing operation – joins the 68,000 sq ft Ocado site at Park Royal in Brent, north-west London – which opened in June 2015 -as part of the SEGRO portfolio.

Alan Holland, business unit director, Greater London, at SEGRO, said that having helped Ocado establish facilities on the west side of London, it welcomed the opportunity to support the growth of its operations in the east of the capital.

“Ocado’s commitment to SEGRO Park Purfleet demonstrates a real positive momentum for investment, job creation and business growth in East London, and underlines the value of high-quality, sustainable, well-positioned industrial and logistical property along the A13 corridor,” Holland added.