First Panattoni is speculatively building a 240,000 sq. ft logistics warehouse named Crewe 240 at Crewe in the North West as part of its commitment to undertake over 3 million sq. ft of speculative development in 2018. 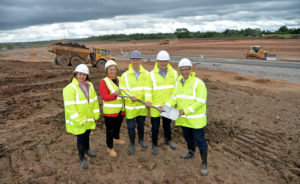 The development is due to be completed by the end of 2018 and is being built to BREEAM “Very Good” and EPC “A” standards.

“This is a landmark development for the region and will bring new jobs and further economic growth to Crewe to supplement ongoing regeneration schemes in the town,” said Skills & Growth Company director Cllr Bernice Walmsley.

This is First Panattoni’s first development in the North West since its merger with First Industrial.