The Road Haulage Association (RHA) welcomed the Chancellor’s announcement yesterday of a 5p/litre cut in fuel duty in his Spring Statement, which it suggested would help firms at a critical time. However, the RHA believes Rishi Sunak could have done so much more for a beleaguered industry.

So, the good news. Yesterday’s cut equates to a £2,000 per year saving on running a typical HGV. “Cutting fuel duty is a common sense move and will be a boost for the economy, but more could have been done,” explained Rod McKenzie, RHA Executive Director. “The Chancellor missed an opportunity to announce a rebate to relieve more pressure on businesses. We’ll continue to press the government hard for this measure as firms grapple with huge operating cost hikes.”

Longer term, the RHA believes the government should bring in an essential user fuel rebate for lorries [and coaches]to bring UK operating costs into line with key European competitors.

There was similarly mixed reaction elsewhere from the industry to the Budget. “This may be ‘the biggest cut to all fuel duty rates ever’, but we cannot lose sight of the fact that this cost burden has not just arisen following the crisis in Ukraine,” said David Bushnell, Director of Consultancy and Strategy at Fleet Operations. “Average petrol and diesel costs have risen by 33% and 38% respectively in just 12 months, from 124.6p and 129p per litre in March 2021.”

Oil price volatility shows few signs of abating and so fleets must find other ways to ease the financial pressure.

“It is also worth noting that the decision since 2010 to freeze fuel duty has led to an increase in emissions of up to 5%, so the fuel duty cut obviously does little to support the UK’s Road to Zero ambitions,” added Bushnell. “The Chancellor may have scrapped VAT on home energy-saving measures such as insulation, solar panels and heat pumps but has offered fleet operators nothing in the way of any new incentives to encourage EV take-up, which may have helped balance out the CO2 impact of the fuel duty rise.”

Commenting on the Spring Statement, Simon Hobbs, Chief Executive of Kinaxia Logistics, noted, “With inflation currently at 6.2% and expected to reach an average of 7.4% in 2022, the cost pressures on businesses are huge and little has been done to address this in the Spring Statement. 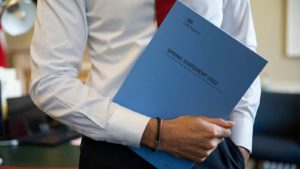 “The increase in the national insurance threshold by £3,000 is good news for our employees, as this will help reduce the imminent 1.25% increase in National Insurance payments that are effective from 6th April.

“Yes, the 5p per litre reduction in fuel duty from 57.95p/litre to 52.95p is a help, and we will pass this reduction on to our customers as soon as we receive this benefit in our costs, but given that fuel has risen by circa 30p/litre in the past six months, it’s a small contribution to the increases we’ve all incurred.”

“While the contribution of warehousing and logistics to the UK economy and our vital role during the pandemic has been acknowledged by Government – most recently by Minister of Employment Mims Davies MP – fine words have once again failed to translate into firm action,” concluded Clare Bottle, CEO of UKWA.

“The 7.4% inflation forecasts announced today are alarming for low-margin businesses like warehousing, as we see increases in rent, energy costs and especially labour. Ultimately, our members will have to pass these costs on to their customers, who will no doubt increase charges to consumers, driving-up inflation further.”

Bottle particularly highlighted the lack of movement on business rates, despite repeated representations from UKWA and others. She feels that, yet again, warehousing has been ignored. “The Chancellor’s announcement of business rates discount makes £1.7 billion available for business, but not a penny of that will help warehousing companies.”

“At a time when our members are facing crippling cost rises due to inflation, have absorbed the impact of Brexit and successive national lockdowns, it’s about time the government started to listen to us,” she said. “Government initiatives like net zero and levelling-up will only be delivered if they commit to providing meaningful, practical support to warehousing. Our industry is key to the nation’s economic recovery.”