Hermes has completed the construction of a secondary sortation tier at its automated distribution hub in Warrington, enabling it to process up to one million parcels a day.

The 15,000 sq m Warrington hub was initially opened in May 2014, costing £14 million and representing the largest single investment by Hermes in its history. 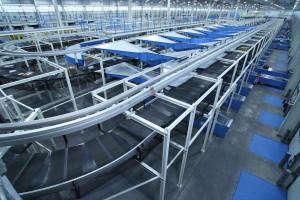 The second tier has cost a further £10 million. Worked started in January and was completed on time

Martijn de Lange, COO at Hermes, said: ““Our preparation for Peak 2015 began as soon as Peak 2014 drew to a close. We are working alongside our clients to finalise our plans by analysing forecasted volumes and confirming collection schedules. In addition to Warrington, we have also added another 125 sub depots to our network and increased the number of scanners and handheld terminals across the business. During the peak season we will also have 200 additional advisors across 19 client sites to deal exclusively with any enquiries; 3,000 more couriers and our money back delivery guarantee campaign will also return this Christmas.”