The HGV levy has raised more than £44 million from foreign lorries in its first year of operation, transport minister Robert Goodwill has revealed.

Jack Semple, policy director at the Road Haulage Association, said: “The levy is a success story. The RHA had very productive discussions with the Department for Transport as the scheme was being developed and it was brought in smoothly and on time – even though the schedule was quite demanding. A year on from the launch, the levy appears to be delivering for the haulage industry exactly what we were hoping for.” 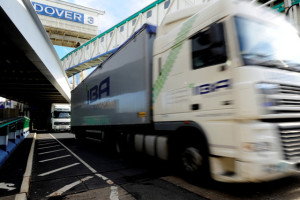 The levy applies to all foreign lorries coming into the UK

Operators from 90 countries purchased more than 1.8 million levies, a time-based charge that ensures all HGVs over 12 tonnes contribute towards their use of UK roads.

Goodwill said: “The HGV levy is proving a huge success and it is absolutely right that all trucks using UK roads should make a contribution to the wear and tear they cause.

Where the levy has not been paid, the driver faces a £300 on the spot fine at the roadside. Enforcement agencies have issued some 2,500 fixed penalty notices and collected fines of over £750,000 for non-levy payment.