Howdens Joinery, the kitchens supplier, is replacing its existing inter-depot fleet with 100 DAF tractor units on contract hire from Ryder.

The trucks will operate across Howdens Yorkshire and Northampton distribution hubs and its four regional transport hubs, delivering to nearly 600 trade depots. 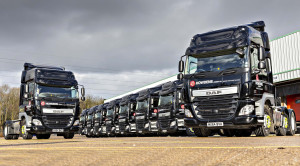 “We had previously carried out our own evaluation of various makes and models and concluded that the total life cost of operating the DAF CF was not only the lowest, but that it also offered the best value proposition for our business. In addition the CF’s mpg figure was an improvement on the existing fleet and it scored highly in our own driver satisfaction survey.