Pan-European property investor and asset manager M7 Real Estate has secured change of use planning on a multi-let retail warehouse park in Scotland.

The Renfrew Trading Estate retail warehouse park near Glasgow can now be let for storage and distribution uses as well as for trade counter operations in addition to traditional retail warehousing.

This is believed to be the first time M7 has secured distribution and storage uses for any of its retail warehouse portfolio in the UK.

Richard Croft, executive chairman of M7, said: “We would not do this unless there was a demand. Within our English portfolio we have a zero per cent vacancy so have not needed to do it. However, if there was a need…

“I consider retail warehouses as warehouses with enhanced consent. Physically they are just warehouses – a box no different from industrial, although better quality in most cases.

“They cost nothing to convert because they are warehouses – it is just a question of adding to their uses. Converting from A1 consent (retail) to B2/B8 (employment and storage) is not overly complicated. We got the additional use  [at Renfrew]very easily.”

The Renfrew Estate comprises a multi-let retail warehouse park comprising ten units totalling 131,639 sq ft to the west of Glasgow. As a result of the additional use, M7 has secured a new letting to Company Shop Group, the largest commercial re-distributor of food and household products in the UK. The Company Shop Group has taken a 20,052 sq ft of space on a 10-year lease. 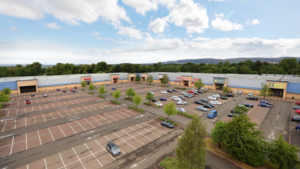 According to research by Gerald Eve the weak retail occupier market has lead to greater talk of ‘repurposing’ retail assets to alternative uses.

“Over the current market cycle there has been reduced demand for traditional ‘bricks and mortar’ retail and there have been few periods of positive growth in retail rents. Against a backdrop of retailer CVAs and administrations, it was department stores which recorded the most negative annual rental growth of all commercial property assets in Q1 [2019], at -8.3%.

“Such weak occupational performance is likely to lead to more redevelopment or ‘repurposing’ of department stores. Landlords are looking at ways to transform upper floors to leisure, hotel, residential, office, and even incorporate ‘last mile’ logistics on lower floors.”

Other retail assets such as large, out-of-town “retail warehouse” stores could also be ripe for conversion/partial conversion for logistics uses particularly for online retailers or last mile/link parcel operators.

Croft said: “This could become a trend as these [schemes]are the best urban infill sites of them all in our opinion.”

The M7 Real Estate Investment Partners VIII fund, which was closed only in April this year, invested in a portfolio of some £126 million across 20 retail warehousing assets in the UK totalling 1,039,255 sq ft since launch in the third quarter of 2018.

Marcus de Minckwitz, director of the omni-channel group at Savills, said in a recent blog: “M7 Real Estate has been particularly active in the retail park market in the UK already and, together with Blackstone, it is one of a number of large investors focused on smaller warehouses in urban European locations.

“Shopping centres are also being modified from traditional physical retail spaces to click and collect hubs, and there is every chance struggling department stores will be broken up for precisely the same thing.”