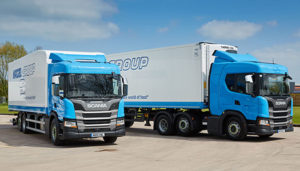 A total of 56 artics will be delivered in 2019. The G 450 6×2/2s will operate on distribution work during the day and inter-depot trunking at night, while the R 450 6×2/2 Highlines will be trampers, with drivers working a four-on, four-off shift pattern.

The other 138 trucks will be delivered next year.

Nagel Langdons is based at Bridgwater in Somerset and operates eight depots around the country.

Engineering manager Tyrone Lanaway said: “In addition to meeting our operational repair, maintenance and servicing requirements, Scania don’t shy away from older vehicles, which is something we particularly appreciate. Also, our depots report their Scanias consistently run for the full six weeks between inspections without issue – which is exactly what an intensive operations such as ours demands.”