Ocado is to take 29 Iveco Stralis NP tractor units, which the manufacturer reckons is the largest UK order for single-fuel gas-powered trucks of any manufacturer to-date.

Five of the CNG-powered trucks will go into service straight away from Ocado’s site at Dordon near Tamworth.

The remaining 24 will go into operation later in the year when Ocado’s dedicated natural gas refuelling facility is opened by Gasrec at its Hatfield CFC. 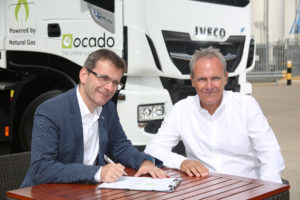 Iveco’s Pierre Lahutte (left) signs over delivery of the first vehicle to Stuart Skingsley of Ocado.

Stuart Skingsley of Ocado, said: “We were immediately attracted to the Stralis NP when it was launched as it appeared to be the step change in technology that would drive gas powered trucks to a new place in the market. The demonstrator vehicle received positive feedback from our drivers, and our own experience driving the vehicle was also positive.

“The green credentials of this vehicle are clear, and once we had reviewed the fuel costs against our existing diesel fleet it was clear there was also a cost benefit to running these cleaner, quieter vehicles.”

The vehicles were supplied by Guest Truck and Van on a five year lease. The Stralis NP is powered by a Cursor 9 Euro VI natural gas engine which doesn’t require any diesel or petrol-derived fuel, and benefits from a maintenance-free and AdBlue-free after-treatment system. It delivers the same output of 400 hp and 1,700 Nm torque as its diesel equivalent.

Gasrec, which operates a network of natural gas refuelling stations, says it is in discussions to build multiple new refuelling sites which could see its footprint more than double by the end of 2019.

The company expects the natural gas-powered HGV vehicle parc above 41-tonnes to reach 5,000 trucks in the UK by 2020 and 39,000 by 2027, following recent product launches by Iveco, Scania and Volvo.