Alex Harvey, head of robotics and autonomous systems at Ocado, gave the keynote presentation to a packed house at the Robotics and Automation Exhibition in Milton Keynes this morning,  highlighting the opportunities and challenges of developing automated and robotic systems for grocery. 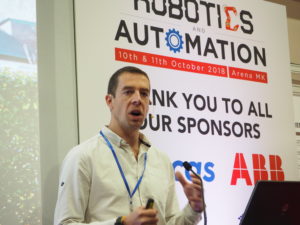 Ocado’s first fulfilment centres at Hatfield and Dordon used automation technology bought in from the major systems suppliers. Harvey pointed out that the sequential nature of the operation meant that it was necessary to build a large complex system that before the volume of business built up enough to make it worthwhile.

Since then, Ocado has developed its own robot-based systems in-house which address the scalability problem. It is these systems that it is now selling to other retailers around the world.

Ocado’s robotic warehouses use stacks of bins to store goods. These stacks are arranged in a grid with robots working on the top to locate the relevant bin and move it to the pick station.

The system can start small and be expanded as business grows, said Harvey. And it is resilient. All the complexity is in the robot, and if one fails it can easily be taken for repair without impacting service levels.

Ocado is now starting to work on robotic picking and expects to have a system up and running this year. This uses a simple suction system and can be used for about 6,000 of the 50,000 skus that Ocado holds. Harvey said it is participating the SOMA project which aims to develop more sophisticated picking technology in the future.

The Robotics and Automation Exhibition is taking place at the Arena MK in Milton Keynes today and tomorrow.