Palletline has opened a 180,000 sq ft secondary hub at Coventry’s West Middlemarch Business Park, much of which will be used as a dedicated processing centre for Amazon. It replaces Palletline’s Rugby hub which is due to close later in May.

The pallet network is one of Amazon’s preferred carrier’s for inbound deliveries. It handles the bookings and administration for its members, who then run into Amazon’s 22 fulfilment centres around the UK. 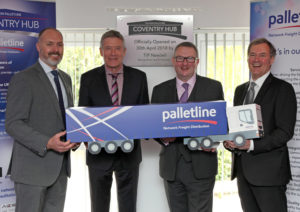 Initially it is expected to move around 4,000 pallets daily. The facility will be for Palletline members delivering on behalf of Amazon from a central hub as the relationship continues to yield significant volume increases throughout the year. During November 2017 inbound peak for Amazon represented ten per cent of Palletline’s network volume, a figure that is destined to grow.

Operations director Richard Gutsell, said: “As a separate sortation facility for Amazon freight, it will have the added benefit of relieving pressure and freeing up capacity for the standard freight moving through the network.”