British Property Federation and Tritax Symmetry say that the logistics sector is set to be a key driver for economic, employment, and productivity growth in the UK.

The logistics sector is set to continue to be a key driver of economic and employment growth and productivity for the UK, according to a report released today by the British Property Federation (BPF) and one of the country’s leading logistics development companies, Tritax Symmetry but there needs to be positive support from national and local government to reinforce its continued growth less the economy should suffer through continued planning reform.

The economic productivity of the sector was estimated at £80 billion nationally, which has grown over 30 per cent since 2013. When a broader definition of the sector is used, including wholesale, this rises to £124 billion.

Tritax Symmetry, the development arm of Tritax Big Box REIT, working in partnership with the BPF and planning consultancy Turley, commissioned the ‘Delivering The Goods in 2020’report to assess the current economic contribution of the logistics sector to the UK economy and ensure that future development meets the needs of the growing UK population.

Online sales are just one factor driving the extraordinary growth of UK logistics. While around 11 pence in every retail pound currently is spent online with no transactional store involvement, this is estimated to rise to 19 pence in every pound by 2028.

The findings build on a previous BPF market report called “Delivering the Goods” which has been used by UK Government policy and decision makers at all levels since it was released in 2015.

The latest report highlights the continued and growing importance of the logistics sector to the UK. The number of businesses, which operate in UK logistics grew to 93,000 from 56,000 in 2014. This 66 per cent growth is in comparison to the 20 per cent growth of total UK businesses during the same period. 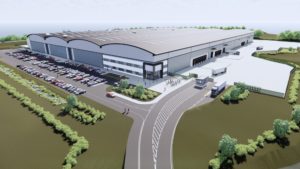 The report also challenged the perception of only low pay job opportunities in the logistics sector. It showed that median salaries in the sector are around £6,700 higher than the average for all sectors, at £31,600 compared to £24,900. This is an increase from £28,000 in 2014. There are now a number of logistics sub-sectors where the average salary is above £35,000 a year.

The latest report has updated the recommendations from 2015, urging Local Plans to align levels of housing growth and commensurate growth in logistics land and space, and to safeguard existing industrial land, where this is appropriately located, through protective policy interventions such as those introduced in the London Plan.

It also asks central and local government to recognise the value of logistics, and the role it plays in supporting the Government’s zero-carbon agenda, particularly when considering how a new scheme can have a positive impact on the local area in terms of creation of community and place.

Jonathan Dawes, planning director at Tritax Symmetry, commented: “These latest statistics from the BPF demonstrate that logistics is undoubtedly driving huge change and growth in the economy. With logistics productivity forecast to increase by 43 per cent over the next twenty years, reaching £114 billion by 2039, logistics needs to be put at the top of the Government’s agenda, particularly when you consider this is 40 per cent higher than the national average growth forecast.

“It is encouraging to see logistics operators and developers increasingly commit to and deliver environmental and social measures as part of their schemes for the wider benefit of the local community, and this is at the forefront of Tritax Symmetry’s thinking.”

Melanie Leech, chief executive, British Property Federation added: “This new report serves to refresh the original recommendations from 2015 as well as giving us an up-to-date snapshot of the logistics sector’s overall economic contribution to the wider economy. Over the last few years the sector has gone from strength to strength, providing increasing numbers of full-time, good quality jobs and serving as an essential component of UK infrastructure, supporting supply chain resilience across the country.

“However, the sector must not rest on its laurels. There are many further opportunities to create an effective policy environment, both locally and nationally, to allow the sector to flourish. One priority must be to ensure that the sector reduces its environmental impacts, including through appropriate site location.”

Amy Gilham, director, Turley said: “Much has changed since the original report with the logistics industry adapting to changes in retail habits, embracing new technologies and beginning to reflect the increasing importance of sustainable credentials.

“Despite positive interventions through the revised National Planning Policy Framework, Planning Practice Guidance and the London Plan, the UK planning system remains a key priority area for reform. We must strive to create the right conditions for industrial land to be planned for effectively alongside the changing housing market and the need to repurpose town centres. Greater dialogue between Government, industry and local authorities will be a critical factor for success.”