London’s Safer Lorry Scheme came into force on 1st September, but one operator has already warned that it is not enough to stop accidents involving vulnerable road users.

The scheme is designed to improve cyclist and pedestrian safety and legally requires every vehicle in London weighing more than 3.5 tonnes to be fitted with suitable mirrors that give drivers a better view of pedestrians and cyclists around their vehicles; and side guards to prevent cyclists being dragged under the wheels in the event of a collision.

Safer HGV Zone signs have also being installed at the same locations as the Low Emission Zone boundary signs. 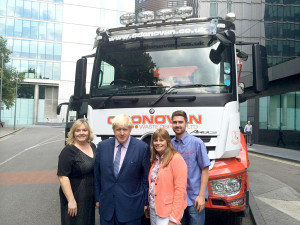 Members of the O’Donovan team at the Safer Lorry Scheme announcement with Mayor of London, Boris Johnson.

But Jacqueline O’Donovan, managing director of O’Donovan Waste Disposal, one of the fleet operators chosen to help launch the scheme, warned that this alone is not enough to stop accidents involving vulnerable road users.

Although she welcomed introduction of the scheme, she said it needed to be combined with more training and education for both drivers and cyclists.

She pointed out that O’Donovan regularly takes part in the Exchanging Places programme, which is run by the Metropolitan Police and Transport for London.

“The scheme enables cyclists to experience a HGV driver’s view of the road and get a better understanding of the blind spots around the vehicle. The purpose is to raise awareness of the dangers of collisions between cyclists and trucks. This type of experience for cyclists and pedestrians needs to be more widely implemented so more lives can be saved,” she said.

“It is without a doubt a huge stride in the right direction for everybody living and working in London to see the Safer Lorry Scheme come into force. However, if real impact is to be made and more lives saved, all parties need to take a more collaborative approach to safety and well-being.”