The merger of Sainsbury’s and Asda would create savings of “at least £500 million” and allow the retailer to lower prices by about ten per cent on many regularly bought items.

The proposed deal, unveiled on this morning (30th April), would see Asda parent Walmart taking a 42 per cent stake in the enlarged Sainsbury’s business as well a receiving £2.975 billion in cash. 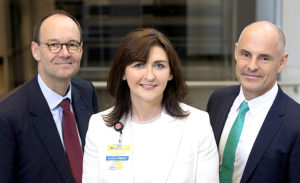 The two companies said the merger would generate net EBITDA synergies, post investments in price, across the enlarged group of at least £500 million. These synergies are comprised largely of buying benefits, opening Argos in Asda stores and operational efficiencies. There are no planned Sainsbury’s or Asda store closures as a result of the combination.”

It is expected that the realisation of the identified synergies will require one-off exceptional operating costs of approximately £150 million. There is also an estimated £600m of capital investment – primarily relating to IT system migration and property opportunities for Argos within Asda stores.

The companies have also identified potential for further synergies, which are unquantified at this time, including cross-selling products and services across the Combined Business, leveraging fixed assets and investment capabilities and benefits from the strategic partnership with Walmart.

The two companies are hoping to complete the deal in the second half of 2019. The deal will have to be approved by the Competition and Markets Authority, which could demand sale of parts of one or both businesses.

The aim is to fast track the approval process to phase two. Normally, the first phase of a CMA review, which assesses whether a deal reduces competition, takes about 40 days. The in-depth second phase investigation could take up to 24 weeks.

The combined group could be forced to sell 75 stores by the Competition and Markets Authority, according to research group Global Data.

This calculation is based on the number of postcode sectors where there are both Asda and Sainsbury’s stores. “We think these 75 stores would be the absolute minimum that the CMA will want disposed of,” said Patrick O’Brien, UK retail research director at GlobalData.

The number could be as high as 197 – the number of postal districts identified by Global Data with both Sainsbury’s and Asda stores. However, postal districts (the first half of the postcode) are quite large, so some store could be far enough apart not to be considered competitors.

Judith McKenna, president and chief executive officer of Walmart International, said: “We believe this combination will create a dynamic new retail player better positioned for even more success in a fast-changing and competitive UK market.”

Coupe said: “Having worked at Asda before Sainsbury’s, I understand the culture and the businesses well and believe they are the best possible fit. This creates a great deal for customers, colleagues, suppliers and shareholders and I am excited about the opportunities ahead and what we can achieve together.”

And Burnley said: “Asda will continue to be Asda, but by coming together with Sainsbury’s, supported by Walmart, we can further accelerate our existing strategy and make our offer even more compelling and competitive.”

Sainsbury’s has a total of 34 distribution centres covering its store and online businesses, including Argos.

* Setting out its results for full year 2017-18, Sainsbury’s said it had achieved cost savings of £185 million in logistics, procurement, store operations, energy efficiency, and marketing.

In total, over the past three year it achieved savings of £540 million against a target of £500m.

The retailer said: “We have well-developed plans in place to deliver at least £500 million of cost savings over the next three years with £200 million of these savings to be achieved in 2018/19.”

* John Hannett, general secretary of shop workers’ union Usdaw, said: “There are distribution workers who aren’t protected by a promise not to close stores. Both companies operate significant nationwide distribution networks employing thousands of staff. We will be seeking urgent clarification on the future for those workers and guarantees for their jobs.”

“We are seeking urgent meetings with both retailers to establish the details of their plans and ensure that the voice of the staff is heard.”