Eurocell’s winning of the ‘Warehouse Initiative’ prize at the Supply Chain Excellence Awards on Monday 8th November is perhaps a reflection of what can be achieved with grit and determination, in the face of the biggest disruptive event the world has seen in decades.

And given the competition in this category, the announcement of Eurocell as the winner by special guest host Shaun Williamson was somewhat of a surprise, although the judging panel was in no doubt as to its merit.

“What was achieved in eight months during a global pandemic was quite extraordinary – and the impact of the company’s relocation and deployment of the very latest racking and handling equipment had a profound impact on its operations,” the judges commented. “We were overall impressed with the logistics of the project, often having to make long-term decisions in the face of all the challenges posed by the lockdowns, materials shortages and social distancing measures.”

The trophy was presented by Rahul Nair from Akabo Media’s Robotics and Automation and IntraLogisteX exhibitions.

Eurocell is a UK manufacturer, recycler and distributor of window, door and roofline PVC products which, over the past six years, has seen its sales increase by 60%. The bad news on the flipside of that good news is that the growth created its own set of problems for the company’s warehousing operations – space was not being utilised sufficiently, previous practices were inefficient and the equipment being used was dated, meaning picking and replenishment were not keeping up with demand.

In late 2019, the company’s executive board decided to invest in the future. It relocated to a brand-new 261,000ft2 warehouse building in late December 2019, just as cases of Covid were starting to emerge in China.

Eurocell is not handling a standard product and this dictated its racking requirements especially. The majority of products are stored in 5m and 6m wide stillages, replenished from the front of the racking although they are then picked from the side to fulfil varying orders. As well as this, to use all the space in the warehouse, the racking needed to take up all the available roof space, up to 12.5m high. To complicate matters further, the company also wanted to cater for continued growth, so storage needed to be condensed closely together so the racking had to be mobile so the storage locations could be pushed together then opened up to access the replenishment locations when required.

A bespoke and innovative racking design was agreed on in February 2020 and the project team then started to bring in contractors and specialists to start the build. A few weeks later, though, the government’s announcement of Covid-19 restrictions put everything on hold.

Not to be defeated, with contractors unable to get on site and project teams working from home, it offered the opportunity to focus on securing resources and materials to put everything in place to spring into action as soon as restrictions lifted. 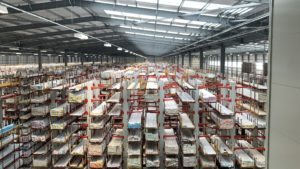 With bespoke electrically powered racking, Eurocell also needed bespoke materials handling equipment that interacted seamlessly with the racking to allow teams to operate as efficiently as possible. Importantly, the company also wanted to ensure the entire MHE fleet was electric for sustainability reasons, hence extra expense was necessary to improve the electrical infrastructure. With restrictions temporarily lifted in May 2020, the first stage of the building works involved removing more than 60 tonnes of the original floor and reinforced substrate, into which the supports and rails for the mobile racking bases were laid. While the racking hardware was being installed, the electrical infrastructure required considerable upgrades, too.

At the same time, extensive work was ongoing in relation to the SAP system that ran and managed the stock, warehouse deliveries and manufacturing – previous systems and processes had been untouched for nearly 20 years and were all paper-based.

There were numerous other hurdles and challenges, but major works concluded in late November 2020 and the transition of stock from the old warehouse to the new started on 19th December. To maintain stock availability, 60% of the company’s product – more than 4,500 stillages of stock – was moved over the Christmas-New Year period. And on the 4th January 2021, the new warehouse became operational, just eight months after the construction work commenced.

What they said… The first half of 2021 was the busiest we had ever experienced. There was no doubt that, if the new warehouse had not been brought online, it would not have been possible to meet the huge surge in orders experienced during this period.

What we said… The new warehouse brought about picking time improvements of 38%, replenishment time improvements of 32%, vehicle capacity improved by 50% and importantly for Eurocell as an employer, health and safety incidents reduced by 28%. It’s great to see a plan come together – but this one came together at a time when making plans was almost impossible.