UniCarriers is expanding availability of TCM forklifts across European markets, with an initial re-launch in the UK in April.

The UniCarriers Group was formed in 2011 from the mergers of Nissan Forklift, TCM and Atlet, with integration of TCM completed in 2013.

Alongside Atlet by UniCarriers, TCM will become the second product brand of the group. 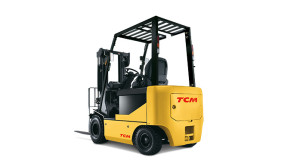 Nobuo Yoh, CEO and president of UniCarriers Europe, said: “Because of its high recognition and the great confidence of customers in TCM equipment, we have now decided to revive the name in Europe as a dealer brand.”

TCM offers a full range of forklifts. To differentiate them from the white-grey UniCarriers models, the equipment will be sold in a yellow finish and via indirect sales channel.

According to UniCarriers, the firm principally wants to use TCM to reach customers who need durable forklifts for industrial applications.