The Munkebo Maersk has become the largest ship to ever sail up the River Thames after making its first call at DP World London Gateway.

The 399 metre long, 60 metre wide, 195,000 ton Triple-E class vessel is capable of carrying more than 18,300 TEUs and is one of the largest container vessels in the world, operating on Maersk’s new East-West Network. 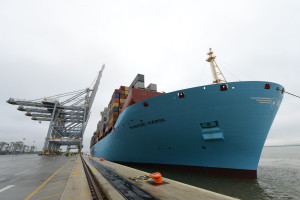 is moving forward with plans for a new 400 metre third berth at London Gateway, scheduled to be operational in the second half of 2016.

Managing director of Maersk Line UK and Ireland, Brian Godsafe, said: “We’re using DP World London Gateway to help ensure the right container equipment is available for our customers in the locations they want it. In this instance, that means out in the Far East where they can be used to transport goods across our East-West Network.”