The 101-door building has sorting technology capable of processing more than 650 items per minute. 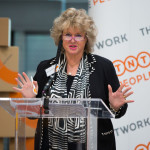 Managing director Marianne Culver said: “Swindon is a flagship development and will set new standards of excellence in how we operate, the technology we use and how we use our strongest assets, our people.”

The site reduces the need for freight destined for the south of England to be transported to and from TNT’s Midlands sortation hubs each night improving efficiency.

Turnover was down 2.4 per cent from £742.9m in 2013 to £724.9m last year. The company said this was due to a decline in revenue from international consignments following poor trading conditions in the Eurozone where many of its customers export to.

Alistair Cochrane stepped down as managing director of TNT UK in November 2014 and was replaced by Marianne Culver in February of this year.