The 32,000 sq m (344,000 sq ft) facility is one of UPS’s largest infrastructure investments outside of the United States. The site has 28 inbound loading bays and 92 outbound. And the fully automated facility uses more than four miles of conveyors.

As well as boosting capacity, the site allows UPS to cut transit times to key European destinations by 24 hours.

Mark Vale, managing director of UPS UK Ireland and Nordics, highlighted the growth that UPS was experiencing – its export traffic grew by 20 per cent last year. The new site currently has a capacity of 28,000 packages an hour and has scope for further expansion. In addition, it is well located for both Stansted and the Channel Tunnel. 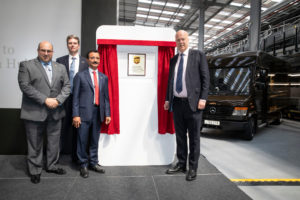 Speaking at the opening, Grayling emphasised the long standing UK relationship with UPS and DP World. He highlighted the importance of trade to the UK in a post-Brexit environment “We have always been a trading nation. In the post Brexit world we will be redoubling our focus on this. It’s the right moment for our country to be a champion of free trade around the world.

“We will reach a sensible trading arrangement in the end,” though he pointed out that as is common with EU negotiations it is likely to all happen at the last minute.

The facility is both a UK hub and distribution centre for the local area as well as a gateway to UPS’s global transport network.

Lou Rivieccio, president of UPS Europe, pointed out that UPS is currently in the middle of a $2 billion investment programme in its European infrastructure as part of a global push to increase both capacity and efficiency.

He pointed out that the ability to save customers one day in transit time to key European destinations could be a game changer for many customers.

Much of the electricity for the hub comes from solar panels. Planning consent for UPS was confirmed within 17 days, one of the quickest ever achieved in the UK for this type of development. This was under the London Gateway Local Development Order which was made in 2013.

“We congratulate UPS on this strategic development. By using DP World London Gateway Logistics Park and Port, UPS will have a fast ‘global conveyor-belt’ directly connected to their own worldwide network,” said DP World’s group chairman and chief executive Sultan Ahmed bin Sulayem.
“This development confirms that the market-centric location of DP World London Gateway, right on the doorstep of London and the South East and on the same site as the country’s fastest growing deep-sea port, can only add value to supply chains – through reductions in cost, time and carbon footprint.”
Share this story: LinkedIn Twitter Facebook Email