There have been calls for the government to waive fines for transport companies and drivers who find they are unwittingly carrying stowaways in their vehicles, until the border control situation in Calais has been rectified.

At the same time, the Road Haulage Association has strongly urged companies to seek accreditation with the UK Border Force. 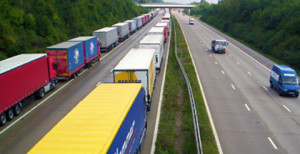 Law firm Moore Blatch said the dangers of intimidation, personal violence and a threat of fines are fuelling a health and safety issue for drivers and their employers. Drivers forced to check their vans or trucks can find themselves in danger of being attacked by migrants desperate to cross the UK border. They are in an increasingly impossible position risking injury when tackling migrants, or fines for ignoring them.

Managing partner David Thompson said: “This is a Catch-22 situation for the hauliers and drivers, many of whom have to cross the borders several times a week – some even daily. Either they risk a hefty fine by the UKBA for every illegal migrant caught hiding in their vehicle, or they risk their lives confronting determined migrants. It is all very well for politicians and civil servants sitting in Whitehall setting out these regulations, but we have to recognise that, in reality, if a driver is threatened physically at the point of embarkation, the driver may have little choice but to commit the offence.”

The RHA pointed out that the UK Border Force requires firms to take basic measures, such as training drivers, providing basic protection for vehicles and carrying out checks. “Provided these steps are being taken, haulage firms and their drivers will not incur fines if clandestines are discovered.”

RHA chief executive Richard Burnett has renewed his call for the French government “to take whatever measures are necessary to ensure that migrants are separated from lorries in the Calais area; and we call on the UK government to support that more strongly in its dealings with the French government. For several weeks we have been calling on the French to deploy their military and the need for them to do so is now clear to everyone.

“It is impossible for drivers to prevent determined migrants getting into trucks and with 5,000 migrants in the Calais area our drivers are exposed, whether they are following the code of practice or not.

“We need urgent action to protect drivers, their vehicles and their loads when moving through the Calais are and we are simply not getting that. The authorities are failing in their duty of care towards our industry and the result is chaos in Calais, losses for transport companies that are simply trying to do their job, drivers increasingly refusing to do the work, the UK supply chain incurring massive costs that will drive up the price of food and goods in the shops, and massive disruption in Kent due to queuing lorries.”

◉ Manston Airport is to be used to supplement Operation Stack – a move welcomed by the Freight Transport Association, which said it could provide respite for local businesses and residents.

“Anything that relieves pressure on the M20 and surrounding roads is to be welcomed, especially at the busiest time of year for freight and tourist traffic. We have been calling on Highways England and the Government to come up with a solution and this temporary measure could alleviate the problem,” he said.

◉ Kent Police has agreed to pilot a fast-track system which will identify loads such as fresh fruit, livestock, shellfish and emergency medicines and route them directly to the Port of Dover or Channel Tunnel without queuing on the M20 or the newly-designated area at Manston Airport.

The Freight Transport Assocaition has been pressing for action on this issue. “Valuable cargoes of lobsters and fish were being held up in queues – this can’t be allowed to happen.  The new scheme is a sensible measure to ensure that loads aren’t spoiled and ‘quick to market goods’ are prioritized,” said Chris MacRae, the FTA’s head of policy for Scotland.

A maximum of 200 trucks per day will be given priority by police on production of a CMR declaration detailing the cargo.  Goods that could deteriorate in quality will be fast tracked.