Work begun on Lidl’s €100 million distribution centre and regional headquarters in Newbridge, Kildare and is due to be completed by late 2019.

The new facility will measure 54,000 sqm and will create 100 new full-time positions, adding to the 250 staff in the existing Newbridge distribution centre. It will serve Lidl’s network of stores in the Leinster area. 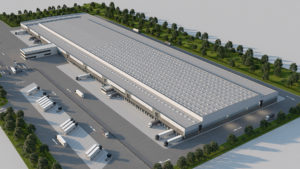 “Work on this new facility will bring a major jobs boost to the local area with up to 2,000 construction jobs created during the construction phase followed by a further 100 new full-time roles joining the 250 permanent staff already employed,” said Kildare County Council CEO Peter Carey. “The local community will also benefit from the construction of a new relief road locally which Lidl has committed to as part of the development.”

“The larger distribution centre will also allow Lidl to handle greater volumes of produce from the 200 strong network of Irish suppliers from whom Lidl already sources over €700 million worth of Irish food and drink products,” added Lidl Ireland director of property and central services Alan Barry