Yodel has taken delivery of its first electric 7.5 tonne – a Mitsubishi FUSO eCanter. It will initially be based at Yodel’s depot in Hayes, and used across London.

The company said it would be put through its paces to ensure that the subsequent electric vehicles are deployed in the right locations. Silent and emission-free, the state-of-the-art vehicle has a load capacity of up to four and half tonnes and is powered by six high voltage batteries. 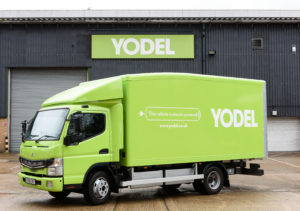 The move is part of a £15.2m fleet investment including new vehicles and trailers as well as technology to improve efficiency and safety. The carrier has invested in Microlise technology for all its tractor units and trailers to monitor speed, location, and road traffic levels. It is also trialling a number of dashboard camera systems for its tractor units, to aid incident investigation.

In addition, Yodel is looking to expand its urban bicycle deliveries. It currently uses bicycle couriers to deliver parcels in central Oxford, Stevenage, Hereford and Brighton with plans to introduce them in Birmingham, London and Manchester soon.