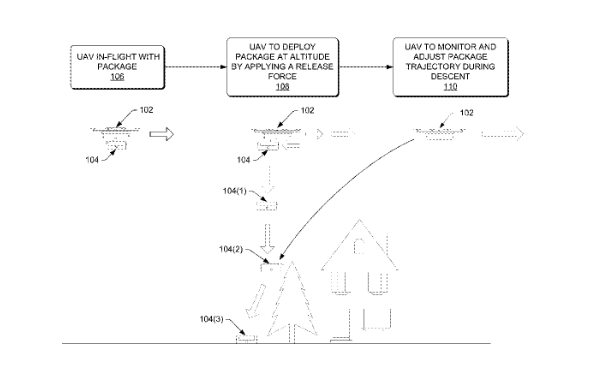 Amazon’s visual description of the plan.

Amazon outlines plans in the patent for a package delivery system that can “forcefully propel a package from an unmanned aerial vehicle (UAV), while the UAV is in motion.”

The document states that as it stands, to deliver a package to a destination an UAV or ‘drone’, it needs to be physically dropped off; describing the sequence of landing and taking off for every delivery as generating “time and energy resource inefficiencies”.

The patent says a UAV could apply a force to a package which would alter its “descent trajectory from a parabolic path to a vertical descent path.” It outlines a number of ways in which a drone could generate and apply the force, including: pneumatic actuators, electromagnets, spring coils, and parachutes.

The monitoring of the package delivery system during its descent is another feature described in the patent. It says: