Amazon has patented what it calls “multi-level fulfilment centres” for drones in urban areas. 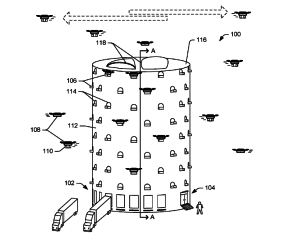 The fulfilment centres would be designed to accommodate landing and take-off of drones, “possibly in an urban setting”, such as in a densely populated area.

The plans come just six months after the e-commerce giant patented flying DCs, or “airborne fulfilment centres”. These floating centres would be supported by an airship, could reach high altitudes of around 45,000 sq ft, where drones would be deployed with ordered items to delivery destinations.