Amazon is set to get a £3.2 million rates rebate from Cannock Chase Council following a successful challenge regarding the rateable value of its massive warehouse in Rugeley, Staffordshire.

The refund back dates to the Rugeley fulfilment centre opening in August 2011.

The warehouse was built in 2009 with a Rateable Value of £3.18 million and subsequent revaluations in 2010 and 2017 have maintained the Valuation Agency Office assessment at this figure.

However, appeals made by Amazon have succeeded in reducing the valuation to £2.5 million. It is thought that the argument for a reduction is centred around the fact that the mezzanine flooring in the warehouse ‘does not count’ as rateable floorspace.

Amazon has been at the forefront of mezzanine development in its warehouses across the UK. Its warehouse in Tilbury has a 550,000 sq ft footprint but with the help of several levels of mezzanines has an internal floorspace of more than 2 million sq ft. It is a similar story at its DC in Bristol.

While exact details of the refund are still awaited, provisional figures indicate that the ongoing liability will reduce by 26 per cent from £1.7 million to £1.25 million a year.

Councillor Gordon Alcott, deputy leader of Cannock Chase Council, said: “There doesn’t appear to be a level playing field between the business overheads paid by ‘bricks and mortar’ businesses against those paid by online traders.

“Amazon describes itself as providing fulfilment centres supplying goods direct to the customer and clearly the business rates system does not reflect this treating such sites as basic warehouses, which means that Amazon is paying substantially less than retail warehouses, and a fraction of the cost per square metre of high street shops. 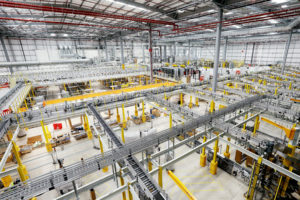 “The Council will be writing to the Government and our local MP to see if this issue can be addressed”.

Business Rates are determined by the Government’s Valuation Office Agency and Councils have no say in the process other than it represents a key funding source.

A report by the Daily Mail in 2018 said that at the time Amazon paid just £38 million a year in business rates in England and Wales.

An Amazon spokesperson said: “Business rates are part of Amazon’s broader £18 billion investment in the UK since 2010”, adding payments contributed to a total tax contribution of £793 million during 2018.

Amazon originally signed a 15 year lease at a rent of £3.95 per sq ft for the 707,488 sq ft Flair building at G.Park Rugeley in July 2011, nearly a £1 per sq ft less than originally quoted by joint letting agents CBRE, Cushman & Wakefield and Burbage Realty.

The cross-docked speculative development, was at the time of development the largest in the region, sitting on a 40-acre site located on the A513 in South Staffordshire.

It has 14.3m clear internal height and a 50 kN/sq m floor loading with 80 loading doors and eight level access doors. There are 523 car parking spaces and 260 HGV parking spaces.

Tritax bought the property from Metlife/Gazeley in 2012 for £34 million.