Logistics operations have seen a steady growth in the use of automation, and we are starting to see robots becoming available. But, asks Malory Davies, how long will it be before they make a real impact?

The 1979 TV ad for the Fiat Strada is rated as one of the best car advertisements ever made. It shows cars being built by an army of robots – one critic was even moved to say it was like watching a Star Wars movie. Today, robots are commonplace in manufacturing, but 37 years after that Strada ad we are still waiting for the robot revolution to come to logistics. Nevertheless, there is a growing view that robot technology is on its way as the next big development in warehouse systems. 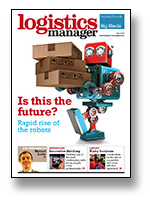 Much of the pressure is coming from the growth in e-commerce which is resulting in more intensive labour operations at the distribution centre. Robots are increasingly seen as one way of responding to this growth.

“While some of the components of these systems (ASRS, AGVs and shuttles) could be accurately considered as a type of robot, they are generally not in the same category as the robotic systems discussed so far in this trend report.”

“The research finds that just five per cent of current warehouses are automated. The reality today is that these automated warehouses are typically highly mechanised environments that still employ people in key functions… Even with all of this advanced technology, in large sorting hubs there may still be more than 1,000 employees who spend their time loading and unloading trucks, handling parcel ULD containers, and manually sorting odd-sized items.”

Clemens Beckmann, executive vice president innovation, Post – eCommerce – Parcel at Deutsche Post DHL, says: “Just like our children can’t picture a world without computers, it is likely that their children will feel the same way about robots. Developing the next generation of robots that can work around and among people will take a substantial investment to advance the technology but at DPDHL Group we believe that soon supply chains will see humans and robots working side by side to handle goods faster and more economically.”

The report highlights five areas where robots could be used:

There has been lots of talk about using drones for delivery, but it is perhaps more credible to think in terms of a ground based robot that could do deliveries. That’s the thinking behind Starship Technologies, which plans to launch its first pilot product this year.

Starship, which was launched by the former co-founders of Skype, is trialling its robots in the UK – starting in Greenwich. And it is planning to launch pilot delivery services later this year.

It reckons that the cost of delivery by robot is less at £1 per shipment. The robots use pavements like pedestrians, travelling at slow speeds and with zero emissions. The robots drive autonomously most of the time but are monitored by human remote controllers who can take over the control at any time.

However, the company needs to demonstrate that these robots can be used alongside pedestrians safely and without causing inconvenience.

Starship chief Ahti Heinla says: “The robot has been in development for almost two years, and we’ve experienced unprecedented levels of interest and goodwill – so it’s great to now be taking the first step to rolling our little robot out for real. The robot has been very well-received by pedestrians in all of the interactions we’ve seen so far, so it’s very exciting to be officially introducing the robot to the British public.”

The company is planning to launch similar testing programmes in the United States and expects to unveil the first pilot services in cooperation with its service partners in the UK later this year.

A number of automation suppliers have systems that can deliver goods to the picker. But Amazon has a division that builds robots that can pick up a shelf of goods and bring it to the picker who stays in one spot. After the picker selects the needed items, the shelf moves away and the next shelf arrives.

The report suggests that it is possible to save 50 per cent of warehousing picking labour with such systems because they eliminate all the walking around.

SSI Schaefer offers a product called Robo-Pick – a stationary robot that uses a camera to identify items in a plastic tote which has been delivered to the work cell by one of SSI Schaefer’s large automated tote storage and retrieval systems. Once the robot has located an item, it picks the product up and places it on a small buffer conveyor that will ultimately deposit the item in a separate transport tote. SSI Schaefer reckons the robot can pick more than 2,000 items per hour depending on product characteristics and order profile.

One of the challenges in developing a picking robot is correctly identifying items. SSI Schaefer uses a combination of 3D and 2D image processing, so the SSI Robo-Pick image processing is not confused by products in several layers or inclined position nor jet black articles, round products or asymmetric or bevelled packages. There is no need to program the individual products beforehand or record their properties.

Knapp reckons its Pick-it-Easy robot can manage up to 1,800 picks per hour depending on the order structure and article range. The image recognition software identifies the articles for picking and calculates the ideal grip point.

The gripper picks the article and transfers it safely to the target container. It can pick a container completely empty. The company says the robot is particularly suitable for slow and medium-moving articles that represent a large portion of the SKUs in the warehouse. Knapp also highlights the fact that the robot is especially suited for regions with high salaries, and luxury, expensive or sensitive articles.

As well as goods-to-person systems, there is also interest in robotic systems that move around the warehouse picking items in much the same way that a human would. However, these are still at the prototyping stage and commercial products are still some way away.

US company IAM Robotics is developing one such system – a mobile robot with an arm on tip and a camera system that enables it to move about the warehouse. It is hoping to have a commercial version available by the end of the year.

IAM says that the robot integrates into warehouse operations without requiring changes to existing infrastructure. It can navigate multiple aisles and pick at or above human-level speeds. SwiftLink provides a simple single point interface to connect, monitor, and coordinate a set of Swift robots with various warehouse management systems.

California-based Fetch Robotics is another company developing systems for logistics. The company was founded in 2014 and has raised more than $20m funding to develop its technologies. The Fetch system, which was unveiled last month, comprises a mobile base, called Freight, and a mobile manipulator, called Fetch. Fetch and Freight use a charging dock for autonomous continuous operations, allowing the robots to charge when needed and then continue on with their tasks. The system includes software to support the robots and integrate with the warehouse environment. The robots are designed to work independently alongside human workers, performing repetitive tasks such as warehouse delivery, pick and pack, and so on.

The report highlights “Baxter” as an example of a robot that might do this. Baxter was launched in 2012 by Rethink Robots as a trainable robot that could work safely alongside humans. Baxter is a dual-armed robot been designed to handle a range of tasks, from line loading and machine tending, to packaging and material handling Rethink Robotics says that it can do the monotonous tasks that free up skilled human labour to be exactly that.

It is already on sale and you can get a quote for a system online. The basic robot costs $25,000 then there are additional costs for hardware and software support.

Rethink says Baxter is safe to operate next to in production environments, without the need for caging. It is manually trainable by in-house staff, reducing the time and cost of third party programmers. It can also be quickly redeployed to different tasks and can deliver a return on investment in under a year.

This is a labour-intensive operation that should lend itself to robot operation. DHL actually trialled a parcel robot in 2003. This had a telescopic conveyer, 3D laser scanner and a robot arm and grabber. This could identify parcels in the container, grab them and place them on the conveyer for moving into the sorting centre. However, DHL decided that the technology was not sufficiently mature at that time and decided not to roll it out.