Robotics promises to be an even bigger issue in 2019 after the success of the Robotics and Automation Exhibition which has just taken place in Milton Keynes.

The Robotics and Automation exhibition will be moving Ricoh Arena in Coventry on the 29th and 30th of October 2019 to accommodate the predicted growth of the show next year.

The 2018 Robotics and Automation Exhibition has been hailed as a major success after a second day which saw more big crowds of buyers attending the event at the Arena MK in Milton Keynes.

And Exhibitors have already started rebooking for next year with stands up to three times bigger. Faces to look out for next year again include L3 MacDonald Humfrey, Element Logic, Bauromat, Neopost, Bots.co.uk and Axelent, plus many more.

More than 100 leaders in robotic technology exhibited at the event including KUKA, ABB, Knapp, Universal Robots, Dematic, SP Technology and Bauromat. Many of the exhibitors commented on the number of high quality enquires they had received. SP Technology described it as their biggest exhibition in 20 years. 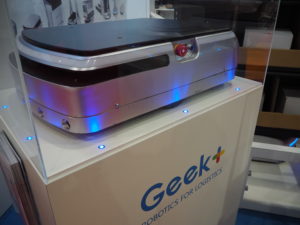 Lit Fung managing director of Geek+, said: “This is the first time we are here. This show is very good and we found a lot of potential customers in the UK.”

Kjartan Kristiansen, system design analyst at Autostore, commented on the “high quality people and people who are interested in buying”.

Will Watt, automation systems manager at L3 Macdonald Humfrey Automation, said: “Quite a few interesting queries and we’ve already booked for next year – twice the size! and this is our second year.” 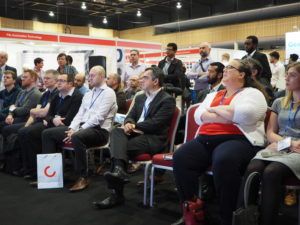 The exhibition also included a comprehensive conference programme with speakers from industry leaders such as Ocado, Amazon, DHL, and Dematic all drawing large audiences.