A high performance alternative to batteries is being developed that could give electric vehicles the same range as petrol engined vehicles, and could be recharged in the same time that its takes to fill a regular car with petrol. 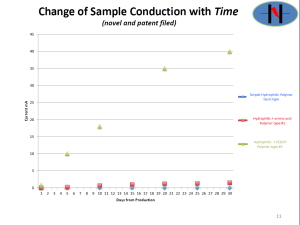 The work on very high energy density supercapacitors is being carried out by Surrey University and Augmented Optics in collaboration with Bristol University.

Supercapacitors are already being used in buses in China, but they have a very limited range.

Supercapacitors have the ability to charge and discharge rapidly over very large numbers of cycles. But, because of their poor energy density (about one twentieth of existing battery technology), they have, until now, been unable to compete with conventional battery energy storage in many applications.

This new technology, which has been adapted from the principles used to make soft contact lenses, offers a much higher energy density. The researchers reckon this technology is between 1,000 and 10,000 times more powerful than a supercapacitor.

The research is being conducted at Surrey University’s Department of Chemistry where the project was initiated by Dr Donald Highgate of Augmented Optics Ltd. The research team was co-led by the principal investigators Dr Ian Hamerton and Dr Brendan Howlin.

The materials being used are based on large organic molecules composed of many repeated sub-units and bonded together to form a 3-dimensional network.

Hamerton said: “While this research has potentially opened the route to very high density supercapacitors, these polymers have many other possible uses in which tough, flexible conducting materials are desirable, including bioelectronics, sensors, wearable electronics, and advanced optics. We believe that this is an extremely exciting and potentially game changing development.”