The Co-op has unveiled a new logo at its distribution centre in Castlewood, Derby – the first of nine to be rebranded, and the largest of the logos in the UK. The blue design, or ‘clover leaf’ was first used in the 60s. 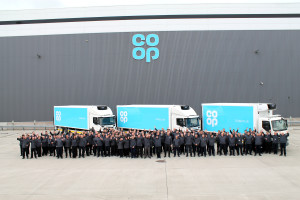 The consumer co-operative said that the design is intended to ‘highlight the Co-op’s heritage’, while at the same time ‘providing a fresh identity to signal the changes to its membership’.

The rebranding relates to the company’s decision to “return to the heart of the communities it serves after a radical overhaul of its membership offer was revealed at its AGM on Saturday.” The membership will now offer members an automatic five per cent personal reward back on purchases of its own brand products and services, and a one per cent reward supporting local community groups and charities.

“The return to the clover leaf represents all that we stand for and our proud co-operative heritage, and we’re thrilled to have it here in all its glory on the distribution centre in Derby,” said Chris Whitfield, retail and logistics director at The Co-op. “We’ve chosen this look because it links to a time when people really understood how they could be co-owners of their Co-op, and how a strong Co-op could help to create strong communities.”