Fast food company DLS (Boldon) has streamlined its distribution operation with a redesign of its cold store facilities. 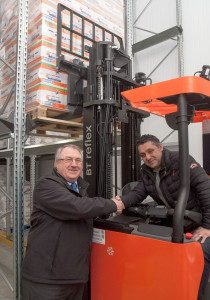 The company, which is based at Boldon Colliery on the outskirts of Sunderland, supplies burgers, chips and other fast food products to takeaway outlets across the UK.

It worked with racking supplier Filplastic to design the storage facilities for a new freezer, which measures 32m x 12m x 7m, to maximise storage capacity and provide flexibility.

John Crawley of Filplastic said: “DLS (Boldon) had the idea to make much more efficient use of the available cubic space than they previously had, so called us in to help. Freezer space is traditionally very expensive, therefore it is important that storage volume is maximised, although in some cases flexibility is also required depending on picking volumes and product picking requirements.

“The racking layout was designed to allow access space to individual pallets picked from conventional pallet racking when required, while pallets which contained bulk stock of similar product lines were located in the drive-in storage system.

“Drive-in racking is similar to block stacking in that it uses the existing space up to 90 per cent more effectively than conventional pallet racking systems, but provides easier and greater access to individual pallets.

“Pallets are stacked in storage lanes, supported individually by the racking system. Forklifts enter the storage lanes to deposit and extract pallets on a first in, last out (FILO) principle. Individual pallets are accessed directly, but on a one by one basis from the front of rack to the rear.”

The job took around four weeks from conception to completion, with a two-week installation time at the DLS (Boldon)’s base.

Kerim Toprak, general manager for DLS (Boldon), said: “Drive-in racking is 100 per cent more efficient than an aisle-based system. We worked with Filplastic several years ago; they are a very good company which is why we contacted them again. What they promise, they deliver. The newly-configured cold store means we are equipped for further growth. It has really helped streamline the business.”