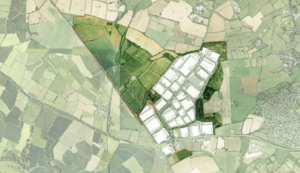 In November of last year, the council’s planning committee approved Gazeley’s application for the demolition of Lodge, Emmanuel and Bittesby Cottages and erection of up to 4.5 million sq ft of storage and distributions with ancillary offices, including up to 39,826 sq ft for a Logistics Institute of Technology with associated playing field, up to 96,875 sq ft small business space.

According to the council, the decision relating to Gazeley’s application was “called-in” by a group of district councillors in line with the Council’s Constitution. As a result Gazeley’s planning application was considered last week  at an extraordinary meeting of Council held on Wednesday 10 January 2018 at Hangar 42, Bruntingthorpe Proving Ground and Aerodrome.

The plan have been opposed by a local campaign group named “Magna Park Is Big Enough”.

Plans by DB Symmetry for the erection of almost 3 million sq ft of storage and distribution buildings will however go ahead.