Davies Turner is moving to a more direct route for its fixed-day, weekly rail import service for LCL cargoes from China. 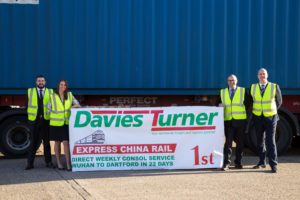 Until now containers have been carried from Wuhan through Kazakhstan and Belarus to Warsaw from where UK consignments were transhipped and trucked via Dover to Davies Turner’s hub in Dartford.

The new route means that containers will now go by rail from Wuhan to Duisburg in Germany. From there they are trucked to Rotterdam and transported by ferry to Purfleet near Dartford. The Wuhan rail hub to Dartford depot transit time is 22 to 24 days.

Tony Cole, head of supply chain services, says: “This new more direct method of moving the container from Wuhan to the UK will remove the current need to unload the container in Poland, then reload into a trailer, which will enable us to offer a lower rate to the market, and reduce the possibility of delays, as well as strengthening security.”