UK consumers spent a total of £3.3 billion online over the four-day Black Friday weekend, IMRG and Experian said. But Argos has become the first retailer to face complaints over late deliveries. 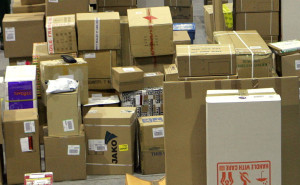 And a retail consultant has warned that ten per cent of the 22 million parcels set to be delivered during the week following will not be delivered on time.

Argos hit the headlines in the national press after receiving hundreds of complaints about late deliveries on its Facebook page after Black Friday weekend.

The retailer has released a statement on Facebook saying: We’re really sorry for the delays in getting through to customer services. Our Black Friday event and new Fast Track delivery service have been hugely popular and are keeping the team really busy; we have added extra staff and they are working through calls and emails as fast as possible. Thanks for your patience.”

“Sorry, due to Black Friday all deliveries will take 5-7 days. Excludes selected Partners.

“We are currently experiencing high demand. If you choose Click+Collect or Standard delivery, please allow 5-7 days for your order to arrive. Express delivery is currently unavailable for Tesco products.

“Selected Partners will continue to offer Express Delivery and 2-5 day Standard Delivery; where available, you will be able to select these options at checkout.”

But MetaPack said 92 per cent of deliveries on Cyber Monday were on time, compared to 73 per cent last year.

It said: “Given that on time deliveries for the previous six months averaged 93%, all evidence would suggest that the industry came together to ensure that a high quality of service was maintained throughout.”

Hermes order volumes grew by 50 per cent on Black Friday in comparison to last year – processing 4.8 million items across the weekend.

IMRG/Experian said the breakdown of retail sales over the weekend was:

Warehouse management software company Snapfufil also saw a sharp rise in shipments over the weekend – on Black Friday handling a 77 per cent increase on the previous Friday.

LCP Consulting warned that some 2.2 million of the 22m parcels due to be delivered over the next week won’t arrive on time.

And over the whole of the Christmas period, the consultancy reckons that 17 million parcels worth £695 million “will not arrive when the retailer promises.”

“Retailers continue to pursue a faster and freer agenda which is simply placing too much pressure on their back end infrastructure and carrier partners to deliver,” said Stuart Higgins, retail partner at LCP Consulting. “With 1 in 10 deliveries risking failure this Christmas, retailers need to ensure they don’t promise what they can’t deliver or the customers will simply find a competitor who can.”

– £75 million (7 per cent) of orders will be delivered late because of the delivery company or the retailer.

– £31 million (2.9 per cent) worth of orders will also need to be re-delivered because of a carded delivery (customer not present at time of first delivery).

* The move from in-store shopping to online was emphasised by figures from Footfall which found that in-store shopping on Cyber Monday dropped by 5.8 per cent in comparison to last year. The retail intelligence service found that shopper traffic decreased on every day of the Black Friday Weekend.

Year-on-year, Black Friday, Saturday 28th November, and Sunday 29th November saw a decrease in footfall of 4.05 per cent, 6.14 per cent and 5.17 per cent respectively.

Steve Richardson, UK regional director of Footfall, said that these figures are an indication of shifting “buying behaviours” – with consumers progressively moving online for deals. Richardson said that the change in footfall also marks a shift in how retailers are tackling discount methods.