Developer Mountpark Logistics announced today that it is funding a speculative development of 735,000 sq ft at Omega South, Warrington which is being developed by Omega Warrington (OWL).

Located at the gateway site to Omega South, the new development is the second phase of Mountpark Warrington Omega and will comprise three logistics centres of 307,000 sq ft, 203,000 sq ft and 225,000 sq ft. 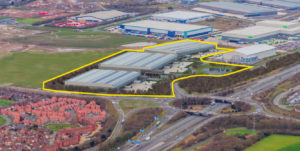 Each building will include a rooftop Solar PV array that will meet around 50% of the facility’s regulated energy. The first two units are due to complete in January 2021.

The first phase of Mountpark Warrington Omega provides 757,555 sq ft and completed in March 2019.  Mountpark let 346,153 sq ft to Royal Mail for a new parcel hub prior to completion and subsequently let 137,865 sq ft to The Delivery Group for a specialist mail hub.

Omega South is part of the 575 acre mixed use Omega scheme at Junction 8 of the M62 motorway north of Warrington, midway between Liverpool and Manchester.  Omega is being developed by a partnership between Homes England, which owns the land and OWL.

Tom Kilmister of  Mountpark said:  “This investment allows us to deliver speculative logistics space in a region where there is a shortage of Grade A stock, as well as giving us an opportunity to expand one of the core assets within our portfolio.”

McLaren Construction is the main contractor. CBRE and JLL are the letting agents.