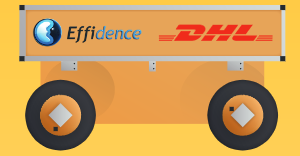 The contest, involving three finalists, took place at the DHL Innovation Centre in Troisdorf in front of more than 180 senior supply chain professionals.

Frank Appel, CEO of Deutsche Post DHL, said: “Robotics is a great opportunity. The western world is lacking productivity progress. Our industry is still working similarly to 20, 50, 100 years ago. It [robotics]hasn’t hit our market really yet. Robotics will create lots of improvement in the industry.”

The DHL Robotics Challenge involved three self-driving delivery robots from different companies and institutions, which all had to take part in an obstacle course.

The first was from Arti, a University of Graz (Austria) company.

On the day an Arti spokesperson said: “Our robot tray is a perfect size for outdoor usage, and a load can be placed on top of the robot. Just one push of a button and it’s totally independent.”

The second parcel robot was a Bremer Institut für Produktion und Logistik (BIBA) creation. The robot is an omni-directional, multi-purpose platform, which can be used for last mile assistant. Although the robot was successful on most of the obstacles, it struggled to make its way over a bridge in the rain.