After achieving the fastest pit stop at seven different races over the course of the 2015 FIA Formula One World Championship, the Scuderia Ferrari team has won the DHL Fastest Pit Stop Award. 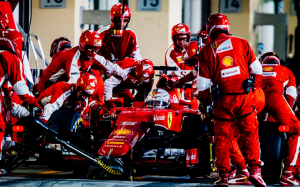 The team this year had the fastest pit stop in Monaco, Japan, Russia, Mexico, Malaysia, and Spain – where their fastest time was just 2.2 seconds.

Nour Suliman, CEO, DHL Express Middle East and North Africa, and presenter of the award said: “Congratulations to Scuderia Ferrari, and in particular their pit crew, for delivering consistently high performance in support of their drivers. In elite motor racing, as is often the case in logistics, great is in the detail – every fraction of a second counts.”