Cambridgeshire Fire and Rescue has been fighting a fire at Whirlpool’s site in Peterborough involving more than 50 trailers.

In a statement on the fire, CFRS said more than 55 firefighters tackled the blaze at the site in Shrewsbury Avenue, which broke out on Thursday evening. 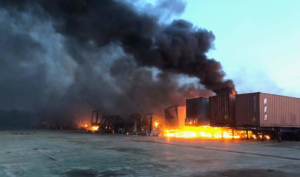 “Crews arrived to find a fire involving 52 trailer units at the site of the former Pedigree Petfoods site at the rear of Hotpoint. The trailers contained parts for washing machines and fridges.”

There were no casualties, and all the crews left the scene by 1am. The cause of the fire is under investigation.