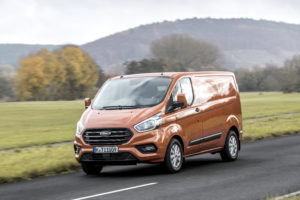 “Transit Custom has been a runaway success since it was introduced, and this new version raises the game once more,” said Hans Schep, general manager, commercial vehicles, Ford of Europe. “We have listened carefully to our customers, and delivered a one-tonne van that is even more stylish, even more productive, and packed with smart features.”

The new model is powered by Ford’s EcoBlue 2.0-litre diesel engine and has been re-engineered to offer new features and capabilities including a new ECOnetic van variant delivering improved fuel efficiency and lower CO2 emissions.

The EcoBlue diesel engine that was introduced to the range during 2016 with a choice of 105PS, 130PS and 170PS power ratings. The new engine delivers cost of ownership and performance benefits compared to the previous 2.2-litre diesel, with fuel-efficiency improved by up to 13 per cent and low-end torque enhanced by 20 per cent.

The updated model also offers a new ECOnetic variant that delivers 148g/km CO2 emissions and return a combined 49.6mpg, a further 6 per cent improvement over the most efficient current vehicle.

The new model is the Ford’s commercial vehicle to offer Intelligent Speed Assist, which enables automatic adjustment of maximum vehicle speed to remain within legal limits, using the Traffic Sign Recognition system to detect speed limit signs. Drivers activate Intelligent Speed Assist via steering wheel controls to set a maximum vehicle speed. The system uses a windscreen-mounted camera to monitor road signs and, when the speed limit is lower than that maximum set speed, slows the vehicle as required.

The latest specification also introduces a six-speed SelectShift automatic transmission – already chosen by 11 per cent of Transit Custom customers – and a unique-to-segment rear air suspension system on Kombi M1 models that is designed to deliver a supple, controlled and level ride across a wide range of load conditions.

Ford highlighted the fact that this new generation Transit Custom sets the scene for Ford’s next major commercial vehicle innovation, with the introduction of the zero-emission capable Plug-in Hybrid (PHEV) derivative scheduled to begin volume production in 2019.

The Transit Custom PHEV use an advanced hybrid system that targets a zero-emission range exceeding 30 miles, and features the multi-award-winning Ford EcoBoost 1.0-litre petrol engine as a range extender. The hybrid electric van will begin trials with fleet customers in London from December this year.