House of Fraser’s distribution centres at Wellingborough and Milton Keynes were reported to have re-opened on Friday (24th August), but only on a limited basis to restock a number of stores that were running low on various items.

The two DCs, which are run by XPO, have been at a standstill since House of Fraser appointed administrators on 10th August in a dispute over payments. 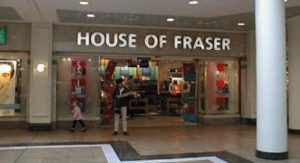 Sports Direct chief executive Mike Ashley met XPO executives at Wellingborough on Monday (20th August), and although there was no immediate agreement there appears to have been a thaw in relations.

While the two sides are still not commenting formally, sources close to Sports Direct said that there has been a “very positive” dialogue with XPO since that meeting – although they had not reached any final position.

The House of Fraser web site, which was taken down on 15th August, remained offline as of 31st August.