The company, which is celebrating its 35th anniversary, has opened a new production facility at Fulda in Gemrany. 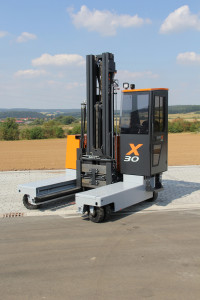 With the company celebrating its 35-year anniversary, Hubtex presented two new groups of products – MaxX and FluX – to mark the opening of its new production facility in Fulda at the start of September. Through the launch of said vehicles, the sideloader manufacturer is bolstering its portfolio by adding modular multidirectional sideloaders in the entry-level pricing bracket. Boasting a spacious driver’s cabin, a multifunction joystick, a new-generation info display and easy battery replacement, MaxX and FluX are ergonomically designed for both indoor and outdoor use.

The FluX is available in two load-capacity classes – 3,000 kg and 4,000 kg – with a 48-volt power system and four-wheel chassis. It can be deployed as both a front and sideloader. Hubtex says it is especially suited to transporting both palets and long objects. A steering system installed as standard for the first time, means the FluX can switch from travelling forwards to sideways without stopping, in a way that causes minimum wear and tear to the vehicle.