The building would be on former agricultural land at Damson Parkway which is next to Birmingham International Airport. The application has been submitted to Solihull Council by Gerald Eve.

In an operational statement supporting the planning application, JLR said: “The LOC is required to support Jaguar Land Rover’s growth at the Solihull plant. Since 2011 Jaguar Land Rover has invested over £2 billion at the plant, the number of employees has doubled to over 10,700 and the number of vehicles that it manufactures has trebled. 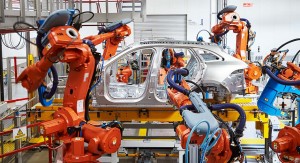 “By being in such close proximity to the plant the LOC would allow an efficient Just In Time operation to take place and would reduce the number of road miles covered by Jaguar Land Rover’s delivery vehicles in the West Midlands.”

The Logistics Operations Centre would comprise a warehouse building measuring 91,800 sqm. It would also include ancillary warehouse offices and a main office at mezzanine levels at the northern end of the building.

At present Jaguar Land Rover operates three principal logistics facilities within the West Midlands – Hams Hall, TyreFort and Midpoint – which are all north of the Solihull plant. The company calculates that the new facility would enable it to cut about one million goods vehicle miles a year in the region.