John Allan, the former Exel chief who is now chairman of Tesco, is set to become president of the Confederation of British Industry in June.

Allan became chief executive of Ocean Group in 1994, and then of Exel when Ocean Group merged with NFC in 2000 to become Exel plc. He masterminded the takeover of Tibbett & Britten to make Exel the undisputed global leader in logistics, operating in 60 countries with 115,000 employees. 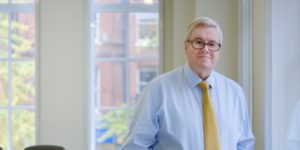 Exel was acquired by Deutsche Post in 2005, and Allan joined the board of Deutsche Post to manage the integration. In 2007 he was invited to become chief financial officer of Deutsche Post – a post he held until 2009. He became chairman of Tesco in 2015.

Director-general Carolyn Fairbairn said: “John brings a wealth of business experience in the logistics, business services and retail sectors which coupled with his board experience in construction and finance will bring terrific insights into consumers and the economy at this important time for the country.”

The formal election of the president takes place at the CBI’s annual meeting on 19th June. Current president, Paul Drechsler, who is chairman of Bibby Line Group, will step down and stand for election as vice-president.